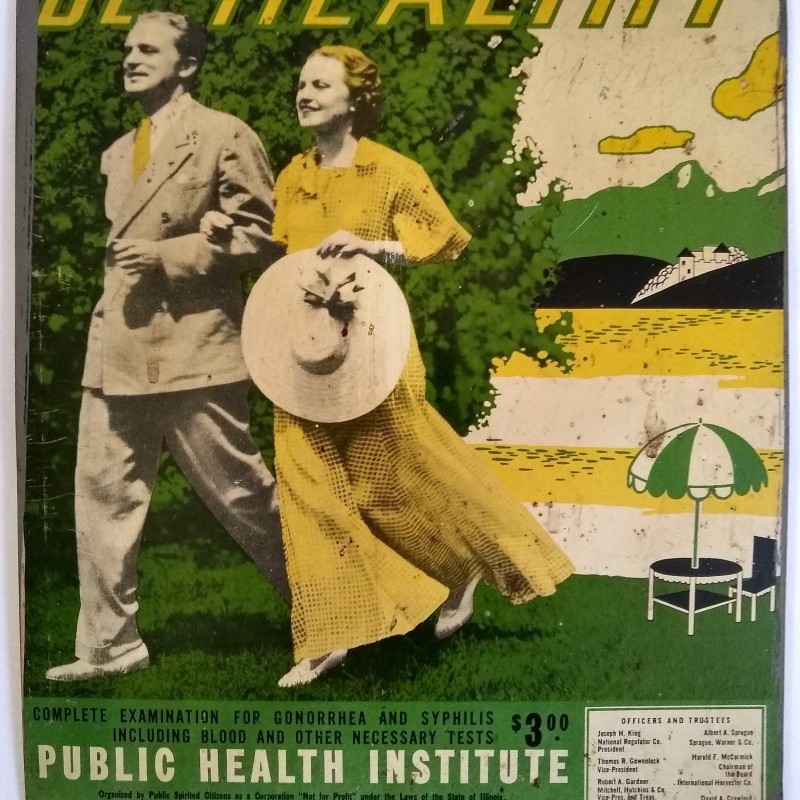 Scarce ephemera of a non-profit medical organization that became the largest venereal disease clinic in the world and a test case for the ethics of medical advertising and the right to affordable health-care.

The Public Health Institute (PHI) was established in downtown Chicago in 1919 to cheaply diagnose and treat the epidemic of venereal disease. Its founders hoped to repeat the military’s successful model of curtailing disease during WWI through widespread publicity and testing. The board of trustees was composed of elite Chicagoan businessmen and philanthropists who added a management style rooted in business efficiencies and early industrial medicine. These efficiencies helped it to become solvent during its first year and by 1929 PHI was serving 1500-2000 patients a day at its three branches, including a south side location opened under pressure from black civic leaders.

Patients remained anonymous and no one was denied service because of inability to pay. Its profits were reinvested in other venereal disease programs, including direct support for the Illinois Social Hygiene League (ISHL) and a $100,000 renovation of Provident Hospital, the first African-American owned and operated hospital in the US.

The PHI’s relationship with ISHL and its director, Dr. Louis Schmidt, brought it notoriety when Schmidt was expelled from the Chicago Medical Society (CMS) for violating its ban on advertising. According to its own reports, the PHI not only advertised in daily newspapers but placed 25,000 posters in public toilets, factories, and streetcars. The CMS’s unanimous action against Schmidt and the Institute—based on how PHI’s advertising challenged the social and economic power of their monopoly—was publicly ridiculed, since it punished a charity that had healed thousands. The case brought attention to the increasing cost of medicine and inadequate health care for the lower classes, initiating a conversation about a universal right to health care that continues to this day.