On the Question of Homosexuals and the Party 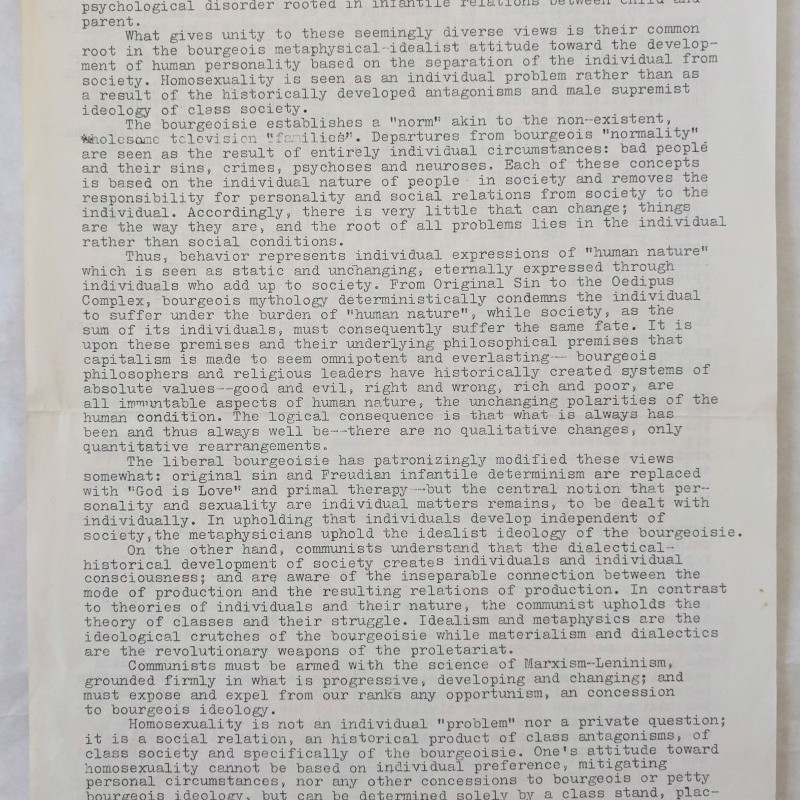 Doctrinaire “Marxist Leninist defense of the line of the Continuations Committee on homosexuality,” arguing there is a “material basis for the exclusion of homosexuals from the party building movement.” The paper condemns the mores and metaphysics of the “depraved liberal bourgeoisie” and provides a materialistic, dialectical argument against homosexuality. Homosexuality is not a private question, it is a “social relation” that “replaces love and comradeship between the sexes with antagonism and hatred […] There is no way that such degenerates and exploiters can be admitted to […] the revolutionary party.”

The National Continuations Committee was part of the New Communist Movement: it emerged from a 1973 national party-building conference intended to create consensus between a number of Marxist-Leninist organizations. Its stated purpose was “a defense of the science of Marxism-Leninism and […] an all out assault on the CPUSA and all forms of revisionism.” Regional groups were formed to provide issue papers to the Continuations Committee, and this appears to be one of them. Its vehement argument against sexual freedom and the factionalism that undermines class unity is an overwhelming repudiation of progressive politics and the American left.

Primary source document of the mixed history of communism and LGBTQ rights. No copies found in OCLC.